A Journal of the Plague Year Day 49

Clapham has become a village, around a green. The streets barely populated, though every supermarket with queues to enter (Tesco, Waitrose, M&S). By the time you hit the park it’s quite crowded, albeit each of us 2m apart -an army of dog walkers, joggers, footballers, weight lifters, cross-fitters and yoga poses as far as the eye can see, clogging up the horizons. Plus the odd toker, affiliated to certain certified benches. Sitting in cross-legged rings, furtively swigging cider, hands on knees to adopt a tantric position should the copshop suddenly materialise, charging from the bushes. We positioned ourselves in the centre of the field to be able to see them coming, then catching up: gossiping, bitching, laughing and swapping news stories. We’ve nowt to report life-wise, it’s all too static. Drinking in the sun, just the one -I am become everything I said I wouldn’t be.

Then the slow traipse home, stopping often. The shop windows, some empty, others promising alternate realities of a different time -but all in still, frozen as a photo. The setting sun, the empty glass of the world -people passing lonesome in the air so clear. Weird, that there are no more animals.

Ubiquitous selfies, not sure why. Maybe if I DIE. 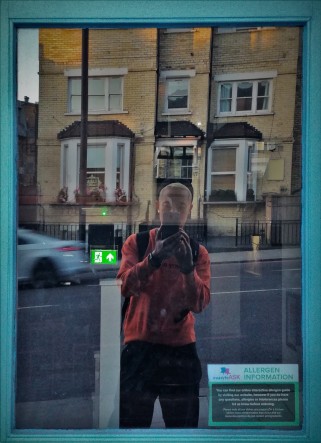 But then the harsh disconnect and back to reality.

Next is the worst fucking street in the Junction, the covered section of the A3207, or Falcon Road, and one of the most heavily used to access all the supermarkets, shops, bars and pubs. Dank is the word, no other better description. It divides up the residential spivs from the upscale shopping area right next door, and is suitably manky to ward off any gentrification exploring beyond the WholeFoods, despite it being only a few dozen metres distant.

I very much want to put up a sign saying Here Be Dragons over the awning, beyond which our estate was originally posited, alongside a small and good natured gathering of local drunks at the light at the end of the tunnel, right by the gates of our highrise patch. These folk can be likened to handy gatemen (and one woman), the aged Caribbean guys on one side and the younger East Europeans and homeless on the other pavement, each talking in their native dialects, and who guard against the spectre of rising house prices that our estate could fall swooningly into. A large chunk of them are delivery guys from the parked scooters congregating, local shopkeepers keeping them company, or those out of work and in the next-door housing. These people are utterly, utterly safe -J finds them an annoyance, I prefer to look on them as public figureheads defending the realm.

The ‘street’ itself drips with slime, enough for stalactite formation they’ll one day come to study and take school groups to eye in wonder. The walls are slurried and dangerous to touch, accumulating pollutants and industrial guano -not even graffitti dares, as likely it won’t even stick. Grey water drips interminably from above, as to make people bring brollies for the stretch, and is filled with exhaust fumes for the hundred metre sojourn, with a pavement so narrow (no one wants to walk under the soggy ventilation pipe) you can’t have two abreast or have difficulty in passing. Two directions on the same sidewalk is problematic. When it rains it becomes a sewer, and a very splashy one with large tsunami-generating puddles at either end -so ubiquitous we should give them names, like Lake Eeerie or Eyeball.

Then once outside you’ve passed through the eye of the needle and straight into the swankier high street. In short if it weren’t for the tunnel everything beyond would have long been turned into a leafy nappy valley, and their giant pavement hogging three wheelers:

This sorry state of affairs is due to two competing councils I’ve heard, that one side of the street is Wandsworth and the other Lambeth, and that they’ve argued like tits over who’s going to cop the bill for the clean, e.g. the roof. Or that it would be silly to just clean one half, insofar as it’s scientifically impossible to correlate gameplans. Or that you know, they just can’t be arsed. The poor do not warrant the effort, and neither do they write in with strongly-worded diatribes.

I do worry. I’m becoming the small town window twitcher, writing letters to the council. Who are of course irremediable fuckclowns the lot of em.