A Journal of the Plague Year Day 86

STILL SICK OHMIGAAHD. It has not come to pass.

But then, woke again a few hours later, sweaty, stained and strained. And it had, miraculously ache-free. Well enough to be up and about and feeling healthy in the first time in weeks. Bizarre.

And well enough to go out by the afternoon to meet some friends who live across the way, first time we’ve seen them in ages. Making full use of the lockdown ease in restrictions.

Discovered Wandsworth Common in all its glory.

The streets through Clapham very much resembled a socially distanced block party, all the pubs, cafes and restaurants doling out custom while the punters resided in doorways and on household chairs, available ledges and walls. Northcote Rd enjoyed a black van with a DJ pumping out the BBQ choons, apparently entirely independent from any business.

Everyone on one side of the street partied, the other side stopped, stared then decided on joining them. 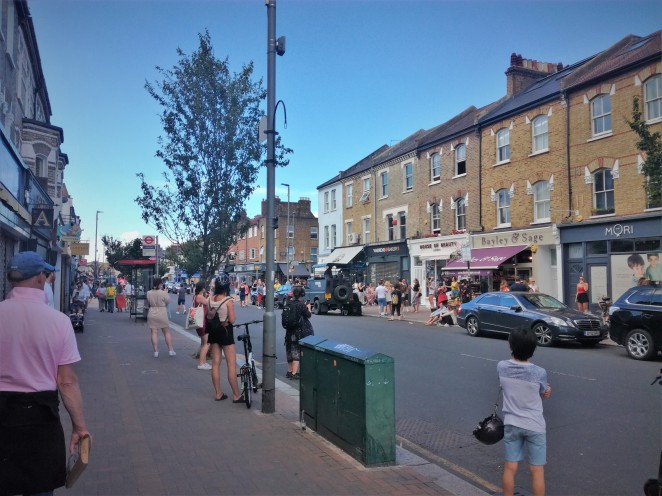 The park is the usual Common scenario – blank grassland with trees at its edges, popular with sports but these days taken over by the picnickers and drinkers, notably ourselves.

Plenty of the local teens were out loitering, circling with digital boomboxes and the hot bods -the kind who still wear their baseball caps backward, circa 1987/ 2017 -with their tops off and throwing varieties of ball.

By late afternoon the clouds were gathering on this first day in a week with sunshine, doom-laden with a double rainbow appearing. Some parts of the space resistant to shadow shone bright even as it rained. It must be hard for them insisting on playing ball, the wind blowing, hands freezing, refusing to put your pecs away while pretending to be in Rio, and not Wandsworth in the rain.

Nothing will ever dampen those horizons, or get in their way. Made for some epic cloudcapes anyhoo. 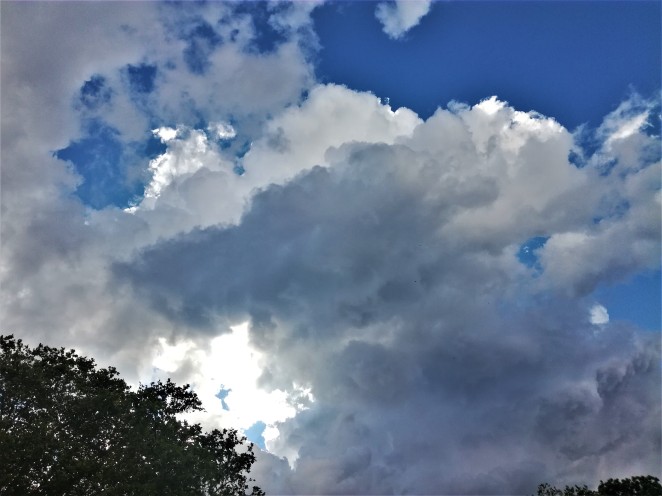 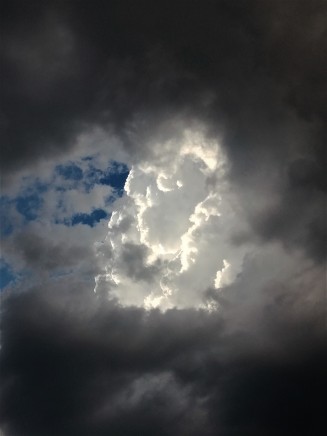 Then it was back to theirs, a sparkling place of modern living and luxury simplicity segued into a historic building -all minimalist de-clutter offset by lone artpieces, historic detailing and orchids. The kind of place you think, one day my son… Designed by the architect who makes one half of the couple, the other a yoga instructor having given up being a vet due to how dire and depressing the industry is. By all accounts riven with death, intrigue and bitching like Game of Thrones with abducted pomeranians and murderfied gerbils – it has the highest suicide rates of any other industry. -I remember a mate who was a veterinary nurse, his little flat dotted with occasional squeaks, hairballs and furtive burrowing sounds at every turn, from the rescued animals he couldn’t bear to put down. He regaled me on the practices that happened.

For example, if some kind soul brought in an injured squirrel, perhaps rounded into a soft ball in delicate hands, you were meant to thank them graciously and wait awkwardly till they left. Then take the furball outside, and pitch it like a baseball at the tarmac or appropriated Death Wall. For the government insists you do it as guidance -as an invasive species from North America it demands annihilation, having sent the native Reds (smaller, tufty ears, red) into ever shrinking outposts in Scotland, as they get outcompeted.

There is another line of conservation, that treats invasive species beyond a certain timescale as acceptable (as almost every wildlife habitat was created by being an invasive species at some stage). The city is currently seeing in a small colony of teeny Yellow Tailed Scorpions in East London, near the old docks where they jumped ship from the Med.

We also have mitten crabs (yes, another Chinese biological import) -more problematic as they’re killing off all local species in favour of one. However, we may have hope -put a price on anything, and the human er ‘spirit’ will suddenly come to the fore and vanquish the impossible multitudes. As seen in the port city of Qingdao just before the Beijing Olympics, when a disastrous algae bloom turned the local coast a brilliant green. The government, having exhausted the army, eco groups and local do-gooders, then added a price for every bucket hauled (it can be used as fertiliser, food additives and fuel) -within days the seas had been cleansed and every grain of sand scrubbed as thousands of humans with greed on their minds descended. 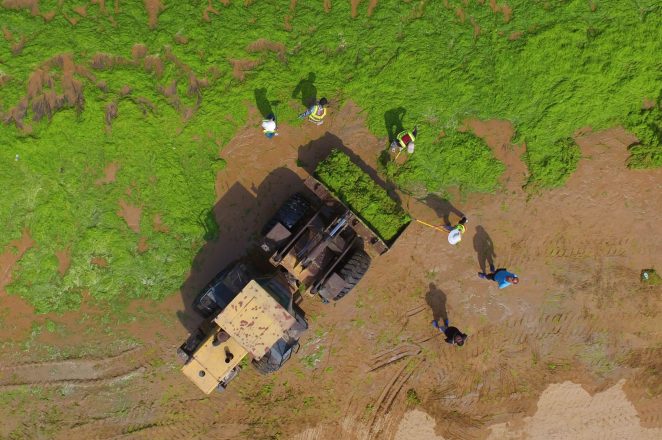 Mitten crabs are of course a prized delicacy in places like Shanghai that holds them as a star dish of the city, winning Michelin wreaths for their sweet flesh. In Europe however they haven’t caught on because of the offputting look of the growths that grow on the pincers (hence their name, and another moniker being ‘Hairy Crabs’). Also, they’re Thames dwelling, sieving through 20,000 tonnes of annual sewage dumped after heavy showers, and thus not as salivating. The Mayor is currently building the enormously overpriced, already-late ‘Super Sewer’ (at 5 billion smackeroonies its ballooned to 5x the original cost thanks to money-grabbing contractors), a 25km tunnel under the city that will be able to take the overflow of raw shit. Until then it’s unlikely to be on any menus.

It was so nice to socialise again, progressed into light drunkendom and gossiping about everything lockdown, riot and race related. It’s almost a social nicety now -to catch up on the current events, protests and pandemic at the start to get it over and done with, though now slowly becoming like Brexit B Word -something not to mention in polite company and ambassador’s balls. It segued nicely, and divisively, into how much of a colonialist twat our sacred Churchill was after 3 million died in the Bengal famine, that a 2017 study on the soil samples now affirms was engineered by his actions not drought (and the fact he denied them aid even after Canada and the US offered). 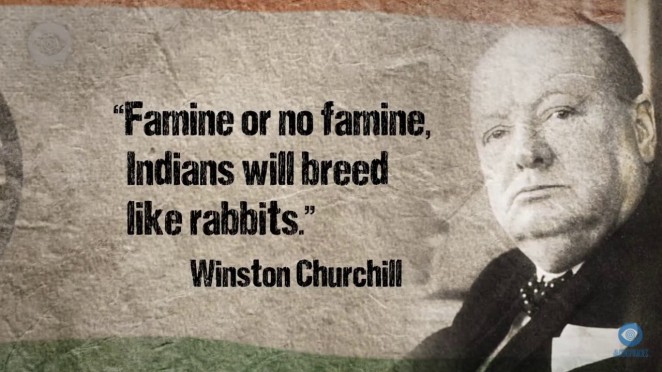 At some stage we moved on to the hot topic of upward mobility (welcome to party-mad middle age, guys) and I stated it was noticeably easier in the UK, touting not just the figures but anecdotes on how many of our posho mates and creatives came from chavvy, knifey fams in caravan parks or refugee trails. But then J pointed out, we’d never even have that convo outside the UK, where class isn’t such a big fucking hang-up. I looked at it, he was right.

We later tried the homemade kimchi -fermented cabbage swamped in chilli (horribly pungent, spicy, and superb); Korean food is not like Chinese -it punches as a single note without so much the differing layers of flavour or texture, but in a good way. We finished the night with more wine, a surefire path to migraine and hangover for me, but what the hell. I need it. The food’s made me as reckless and unapologetic, likely to fight on the beaches.

Not so much a block party, more a fizzy, enjoyable slump into foreign sofas. 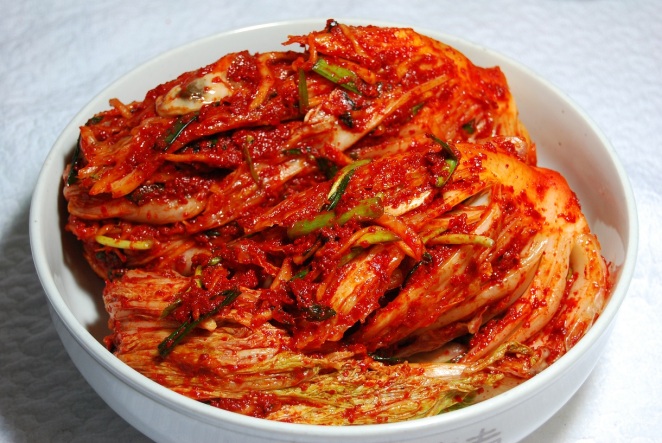