Today was the longest day -early this year. The sun got up at 4am and went to bed again by 11pm, when the last of its colour vanished from the skies. A friend happened to have a beeday in Clapham Common and it was rammed -the first sunny day in about 2 weeks, plus it being midsummer solstice and a Saturday – I reckon about 5,000 people out on the Common having a jolly. There were constantly about 6-10 of us on socially distanced matting with people passing through and being replaced though I didn’t know anyone, but we got on fab, got drunk and played pictionary to an epically setting sun.

Tried to have a conversation with a couple where the inevitable –so where are you from? or what do you do? didn’t come up, and waited for the info to be volunteered -I think that’s a new politesse for London. The guy was talking about his work needing him to travel and decamp to NYC etc, with his accent hard to place. In the end he mentioned he’d studied interior design and was from Malaga, and his partner French, probably from Caribbean ancestry being able to speak Creole, (alongside Spanish, French, English and Portuguese). I think we got on so well because none of us ever asked those ubiquitous questions, a sign we weren’t that kind of judgmental.

The birthday boy and his other half, friends of J, were moving to a wild, tropical part of China -Yunnan province that’s wreathed in jungle and hilltribes -having been yoga teachers and Buddhists, so a bittersweet goodbye. Everyone pissed by then and fucking the social distancing, hugging at the end. We’re idiots.

Much of the crowd had diminished by then.

Though still in numbers at 9.15pm 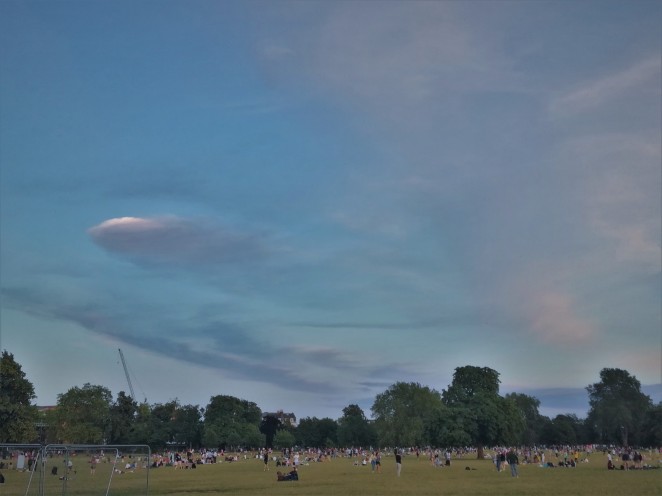 There was a 250 year old churchyard right by us -Our Poor Lady Trinity St Clappers -which is surely sending a lengthy naughty list to Santa, or Satan. Because the police had closed the loos to discourage people staying too long, and the Common without many bushes, every fucker was using the site as an open air urinal. Couldn’t believe it but hundreds of men were pissing on the walls for hours, I counted about 12 stains at any one time on the back stretch alone, gravitating like furtive zombies staring into brick. I cannot imagine what the stench must’ve been like, wafting occasionally downwind and frightening horses. Nor for the poor deacon who’ll maybe swing by tomorrow (services are still banned thankfully so might not), but if doing so will faint, robes flying. Yours truly used a bush by the corner of the skatepark, AWKWARD when the family went by, everyone meerkatting their attention to the amazing lawn in the opposite direction.

A had stayed behind to work on his CV and apply for jobs but once home, we went for a toke through languid streets, sunset turning to the midnight blue of dusk. What a lovely fucking day.

I think midsummer’s gonna be a thing for me now. I’ll get all pagan and dress up in leaves and arson. Hail to the next year; may it be infinitely better than this one.

Hmmm.. maybe last year someone got fucked, pissed on the stones, and sungod Bertha pissed back.